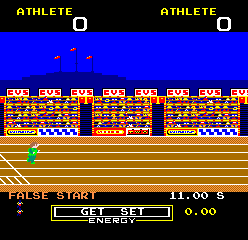 The Games of the XXIII Olympiad were held in Los Angeles in 1984 and for the first time since the advent of the video game industry, this king of sporting competitions was to be held in a first-world nation. In simpler times, this might have inspired people to head out to a track or gymnasium to try their stuff, but now for the first time an industry was poised to let the hands of the middle-class masses do all the work virtually, through joysticks, needing no facilities or specialised equipment (beyond a video game console) to try the whole gamut of events.

Since numerous companies realised this around the same time, from a marketing perspective, the only serious question is: what's going to make your Olympiad game stand out from the rest? Will you have an expensive celebrity endorsement by a Gold medal-winner? Will you implement the flags and national anthems of all participating countries? Perhaps you've been beaten to the punch. Well, here's a tack no one has considered yet -- have the player control the Hunchback of Notre Dame, as he shambles faster, higher and stronger toward Olympic gold! He's an established hero of video games plus his public domain status makes him cheaper to use than, say, Sam the Eagle, the mascot of the 1984 Summer Games.

I don't know what elapsed at that board meeting, but the pitch was green-lighted, and so we ended up with a game in which our unlikely hero Quasimodo is guided, through dedicated joystick-wiggling, through the 100m sprint, long jump, shot put, discus throw, javelin throw, 110m hurdles and high jump, all in hopes to impress Esmeralda, the object of his affection. It's a far cry from the belfries and gargoyles of the cathedral of Notre Dame de Paris, but perhaps the change of scenery will do him some good.